dating back to 1608. It still attracts hundreds of visitors today” 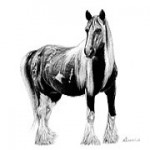 The ancient Fair of Muff was one of the celebrations connected with the Loughanleagh Festival of Lunasa (August). It was an ancient Celtic Fair, which has its origins in the remote past. A famous horse-fair was held there on the 12th of August and has continued annually since. Before the calendar change of 1752 it was held on August 1st – La-Lunasa. The “modern” Fair of Muff can trace its origins to the year 1608, when King James 1 granted a licence to Garret Fleming of Cabragh, to hold a Tuesday market at the “Castle of Clanchye” (Muff Castle), and a fair on the first of August and the two following days. This of course was a revival or renewal of the old Celtic Fair. Flemings interest was chiefly in securing tolls. In the early decades of the last century, when faction fighting was the order of the day, the fair was often the scene of riot and tumult.

Today, the tradition of the Fair still takes place on the 12th August each year and continues to be a focal point in the Irish calendar amongst horse traders for the buying and selling of horses with many’s a deal done and sealed with the traditional spit and a handshake.   In addition, it’s become part of the pageantry for all kinds of street vendors to set up their stalls for the day and bargain with the visitors.  At the Rock of Muff, games representing the old “Penny Toss” and “Skittles” attracts those interested in gambling a few bob in the hope of turning a profit.  The bar close by, the dancing deck and music provides visitors with an opportunity to re-acquaint, enjoy the crack and talk about old times.

The Fair’s importance in Irish culture is highlighted each year with features in both national and local newspapers, not to mention a special feature in 2011 on the renown ‘Lesser Spotted Ulster’ programme by journalist and broadcaster Joe Mc Mahon (Season 14,Episode 18).