When the Catholic Irish in 1641 rose in rebellion to regain the lands they had lost in the plantations, Thomas Fleming son of Richard Fleming joined the rebels. In 1647 the Parlimentarian army under General Jones marched from Carrickmacross into Cabragh in County Cavan. On Friday October 15th 1687, Jones with some horses rode out to Muff Castle, described as a place of good strength, fortified with four square flankers. 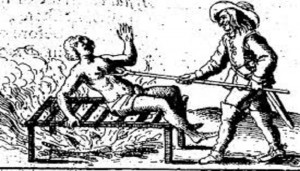 There was in it a garrison commanded by a son of sir Thomas Fleming. When summoned to surrender it yielded, marching out with bag and baggage. Though captured and occupied by the Cromwellians in 1647, it was again occupied by rebels in October 1651. Colonel Venables, one of Cromwell’s officers, was then operating from a base in County Louth. When he fell ill and became speechless, Colonel Barrow commanded the forces in his absence, and marched into County Cavan. On his way, he retook the Castle of Muff. We read ‘The half was surrendered upon mercy, and half of them had quarter for life and the other half were executed’.Tradition has handed down colourful details of the castle and its doom.

It was one of the strongest castles in Ireland. Twenty horsemen were on guard there, night and day. The English army destroyed Moybolgue Church on their way to take Muff. The shots could not take a chip out of it until an old cobbler, who knew where there was a keystone, told the English his secret, for which he was promised anything he would name. When the castle was taken, the commander asked the cobbler, “What have we to give you”? “My house and my garden rent free for ever”, replied the cobbler. His request was granted, but the officer added: “Poor I found you , and poor I must leave you”.