In 2008, local businessman and iron craftsman Andrew Clarke’s passion for local heritage and it’s preservation is well known in the area.  Resident in the heart of Muff itself and a strong advocate and member of our Trust, it’s fair to say that all things Muff and heritage is present in his DNA and runs in his veins.  With the Muff Fair 400 years milestone approaching, Andrew felt it was necessary to mark the event with something special.  His concept was to build a carefully handcrafted horse shoe monument in iron to be located at Muff Cross using his skills and those inherited from his forefathers. 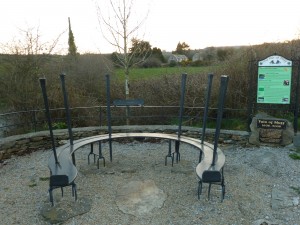 The shoe part of the iron crafted shoe was designed and crafted to be elevated to be used as a seat to be suspended and supported using 7 large nail size pins shaped like those used by a farrier.  The monument was to be encircled by a stone wall built using local stone to incorporate built in rings to facilitate the tethering of horses on the day of the fair.

Work soon got underway and with Andrew concentrating on the ironworks,  the construction of the stone wall was undertaken under the stewardship of local stonemason and expert Eugene Lambe, ably supported with the help of Kevin and Tomás Smith and Brendan and Cormac Mc Mahon.  Eugene’s son Adrian Lambe (RIP) was the main overseer who kept a keen eye on all the proceedings from his wheelchair making sure there was no lagging on the job. Altogether, the project generated great interest within the community and many people gave up their time and talents willingly to make the project a great success.

In 2010, a history board was erected at the site, framed within a beautiful iron frame crafted by Andrew and family members, Raymond, Jonathan and Alan. The logos were designed by Conor Mc Mahon.  Minister Brendan Smith TD done the honours of cutting the ribbon and unveiling the monument on the morning of the Fair of Muff which was attended by a large crowd.

At a later date in 2012, a group of around 40 adults and children spanning 3 generations assembled at Muff Cross to view the planting of a horse chestnut tree. The tree was kindly donated by Patricia, Francis and Edward Cooney of Cooney Nurseries, Tierworker. The beautiful shaped tree was planted directly behind the “Horseshoe Monument”  where it will provide a fitting backdrop to the work of our local craftsmen. The ribbon was cut by Patricia Cooney at 12 mid-day in glorious sunshine and a vintage bottle of bubbly was cracked open to celebrate the occasion on the 29th of December 2012

The main stay for the tree is adorned with a plaque inscribed:

“There are no strangers here – only friends who haven’t met”