The earliest recorded castle in the parish was at Muff or Cordoagh. According to a list of Breffini castles entered in the O’Reilly pedigree this castle,  Caislean an Mhaga – (Muff Castle/ Castle of Clanchye)” was erected by Conor Og O’Reilly – son of Conor Mor. The death of Conor Og is entered in the Four Master 1436. 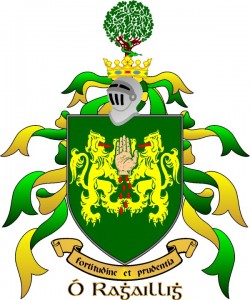 The foundation of the castle therefore can be ascribed to the first half of the 15th century. The castle, in the townland of Cordoagh, is shown on the baronial map of 1609, and on the Down Survey record of half a century later.

The castle is believed to have been destroyed by Cromwell’s plantation and an account of the 1641 rebellion at the castle and it’s demise is documented in a separate chapter (Refer to page “The 1641 Rebellion” under this menu tab).

The ruins of the castle were still to be seen up to the early 1900’s. According to local accounts the walls were uprooted and used for road and house building material.  Sadly, today there are no visual remains to be seen of this great castle.