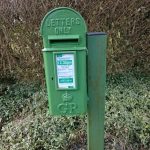 One of these post boxes is located at our own Moyar Cross close to Loughanleagh and bears the royal cipher G R (meaning George Rex -King George in Latin) with the crown between the G and R. This signifies that the post box was made during the reign of King George V in the period 1910 -1936. These post boxes are very rare in Ireland.

The post box would originally have been red and are made of cast iron but with the formation of the Free State they were repainted green.

An Post has said it will take “every step within reason” to preserve its old post boxes. This follows a request made by the Minister for Culture, Heritage and the Gaeltacht to Dublin City Council, asking them to put heritage boxes on the Register of Protected Structures. The proposal to place all old post boxes on the Register of Protected Structures would compel “An Post” and County Councils to preserve and maintain old post boxes into the future.

There are hundreds of old post boxes around Ireland and many of them still feature the royal crest from the three final British monarchs who had jurisdiction over Ireland at the time – Queen Victoria, King Edward VIII and King George VI.

We would encourage the local people to continue using this post box when feasible, to help ensure its continued viability and continuity of the postal service for the neighbouring townlands.